Bored and Alone? What Students Find in Catholic Schools

A recent study by CASEL found that today's typical high school student is bored. This is probably nothing new in higher education, but the numbers might be higher than we think. Thirty percent of high schoolers say they are bored all or most of the time. Over half of young adults who decide not to go on to college say they were bored in high school. What is the antidote?

Another recent study from the University of San Diego and cited in the USA Today found that teenagers in America report record high levels of loneliness. The numbers are again remarkable; 39% of high school seniors reported often feeling lonely. While the causes of this loneliness certainly merit closer study, I believe an antidote can be found in the integrated approach espoused for centuries in the Catholic school idea. A true and current story best illustrates this.

Jacob found himself facing Junior year at a county school alone as his friends all began taking classes at the vocational school. His parents had wanted him to come to Lehman Catholic as a freshman, but he had wanted to stay connected with his friends, so he remained at his local public school. He had enjoyed his time with his friends – sometimes a little too much – getting into a little trouble, even though he wanted to pursue college and academics.

He heard good things about Lehman from friends he made playing summer baseball, but in his mind he also had all the negative things he had heard about Catholic schools in the past, especially how outsiders were treated and how its students were snobs. Not being a Catholic himself, he discounted Lehman as a serious option.

Facing the prospect of a Junior year without friends at his high school, he decided to look into Lehman a little more and scheduled a day to shadow one of his friends at school. During that shadow day he was convinced that Lehman was a different kind of place – the kind of place he needed to be. The changing moment during that day was during the religion class he was sitting in on. The discussion turned to objective good and objective evil which do not change based on the opinions of individuals, but rather can be discovered by all and allow us to truly be free. He realized that the culture of Lehman Catholic wasn’t about the opinion of one group over another, but about a common pursuit of truth.

Now, Jacob is thriving in his senior year at Lehman. He does not get in trouble – instead spending time in new pursuits. He has grown in Mr. Wagners Math class which goes beyond the book in examples and explanations. He has discovered a desire to pursue a career in industrial design largely through the Art classes of Mr. Langenderfer which helped him understand what art really was, not just how to copy a picture. In the process he has built both an excellent portfolio and the confidence in his own skills to be able to succeed in that career. Most recently earning a top prize at a prestigious art show.

In all of this, he is surrounded by a solid group of new friends, who welcomed him from day one. Underlying these academic and life pursuits is a newly enkindled Faith in Jesus Christ, a new perspective on religion, and a serious pondering of his own ongoing conversion. For Jacob, what started as a struggle to cope with the prospect of loneliness and boredom ended in newfound friends, passions, and Faith.

Do you desire to find a high school experience that promotes academic growth, real faith, and true friendship? Hear from real families about their experience at Lehman Catholic. 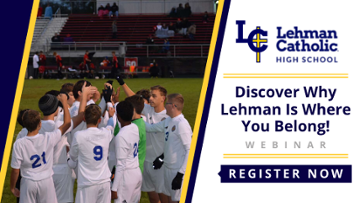