History Before Lehman Catholic - Before 1970

The 79 bishops who gathered in Baltimore for the historic Third Plenary Council in 1884 decreed that within two years, every Catholic parish would establish a school, or the pastor would be replaced.  The action encouraged Catholics in the area, who had earlier established grade schools, to begin planning for the establishment of high school education.

Holy Angels Parish (Sidney), with the assistance of the Sisters of Charity of Cincinnati, established the first Catholic high school in the area, and graduated their first class in 1889.  Three graduates, all female, received their diplomas in that first ceremony.

In 1904, Saint Mary Parish (Piqua) offered a two-year commercial diploma.  They expanded to a three-year diploma in 1916.  The first four-year diplomas were offered in 1918.  The Class of 1918 included four students.

In 1924, Saint Boniface (Piqua) added a high school program, and the school graduated students in 1927 and 1928.  In 1928, the decision was made to send students desiring a high school diploma to Saint Mary.  The school was renamed Piqua Catholic in 1930, reflecting a more inclusive nature.

By 1970, Saint Mary Hall was 100 years old, and an inspection by the State Fire Marshal’s Office revealed that extensive renovation would be necessary if the building was to continue to be used for educational purposes.  After lengthy consultation, the decision was made to merge with Holy Angels High School.

The Holy Angels building was relatively new, having been constructed in 1954.  A five-room addition was added in 1964.  With Holy Angels agreeing to move the seventh and eighth grades back to the elementary school, the building provided ample room for the students of both high schools.

Through the visionary community leadership in Piqua and Sidney, under the direction of Principal Father Robert Monnin, and assistance from the Sisters of Mercy, the merger was a success. The consolidated school was renamed Lehman High School, after Monsignor Edward C. Lehman.  Monsignor Lehman had served as pastor of Holy Angels Parish for 34 years, and had supervised the construction of the high school prior to his death.

In 1985, the school community launched the Development Campaign, with a goal of $1,000,000.  No local institution had ever endeavored to raise that much money previously.  Within six months, $1.3 million had been pledged.  The funds were used to make major renovations to the building.

In the 1990-91 academic year, the school received initial accreditation by the North Central Association of Colleges and Schools.  The school attendance area was expanded, and for the first time, students began to travel to the school from as far away as Troy, Greenville, Wapakoneta, and Russell’s Point.

In 1995, the school community began the 21st Century Campaign, with an initial goal of $5.5 million.  The campaign eventually raised pledges of $7.5 million.  The funds were used to construct a major building addition. Ground was broken for the addition in 1996 by Archbishop Daniel Pilarczyk.  The addition included classrooms, labs for science, visual and performing arts, a computer science lab, media center, gymnasium, and chapel.  The building dedication, presided over by Bishop Carl Moddell, took place just prior to the 1997 academic year. 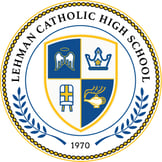 The Lehman High School Crest is divided into four quadrants.  Three of the quadrants represent the three parishes that first formed Lehman High School.  Represented are the Mitre of St. Boniface, the Wings of Holy Angels, and the Crown of St. Mary.  The fourth quadrant depicts the lamp of knowledge. The four are linked together by a chain symbolizing the consolidation. 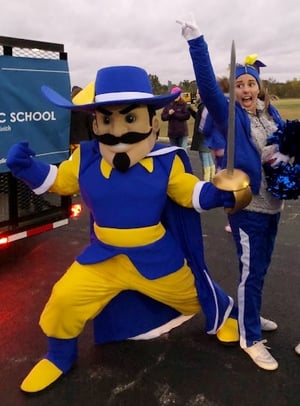 The Lehman High School’s mascot is the Cavalier. The Cavalier originally was used by Piqua Catholic, and the tradition was adopted for use by Lehman. Historically, cavaliers were the elaborately costumed troops loyal to King Charles I of England, who devoted his reign to the restoration of Catholicism to England.  Cavaliers of today, as of old, represent integrity, steadfastness, loyalty, chivalry, bravery, and piety. If you are lucky, you'll get a chance to meet "Cavalier Joe" - he has a tendency to show up unannounced at numerous Lehman events.

Service Club
Service Club is a combination of our Cavs for a Cure and Interact Clubs. Members raise awareness of cancer-related issues and organize various fundraisers and service projects throughout the Lehman community.

Pro-Lifeguards
The Pro-Lifeguard members raise awareness of Pro-Life issues. Students plan and participate in prayer vigils at various community events and agencies. Each year the Pro-Lifeguards attend the March for Life in Washington D.C.