I am happy to announce that Veronica Gaier will join us next year as the principal of Lehman Catholic. Veronica is a 16-year veteran teacher of Piqua Public Schools. Her primary focus has been in the areas of math and science; however, she has taught a wide variety of courses from the sixth through the ninth grades. Veronica has also been an adjunct professor at Wright State and Edison instructing pre-service teachers. She has been a Resident Educator Mentor since 2014, and a Collaborative Leadership Team Member from 2013 to 2016.

Prior to teaching in Piqua, she received degrees from Edison, The University of Dayton, and Walden University. She has held her principal licensure since 2018. 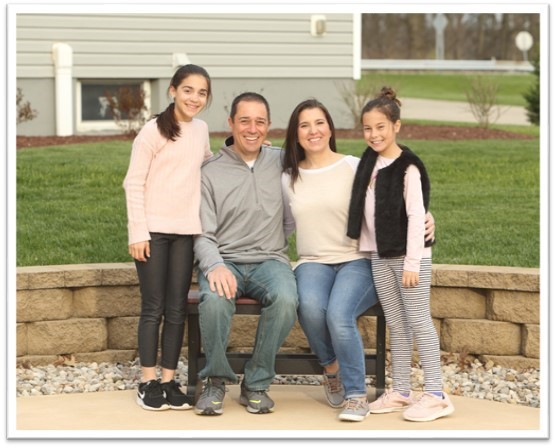 Academically, Veronica has been recognized for presenting at various conferences and workshops at the local, state, and national levels. Her topics include writing, technology integration, the PBIS framework, and most recently, providing mental and emotional support for teachers and students at the Ohio Middle Level Association 2020 State Conference. In 2019, Veronica was recognized as the 2018-2019 Outstanding Teacher of the Year by her peers at Piqua Central Intermediate School.

Born in Colombia, Veronica was a high school exchange student and had the opportunity to continue her education in the US. Along the way, she met her husband, Ben. Veronica and her family are active members of Saint Michael’s Catholic Church in Fort Loramie. Most recently she has taken on the challenge of being a Junior High Catechist at the parish. Ben, and their two daughters, Izabella and Allegra enjoy fishing, crafting, and a highly competitive game of Scrabble. Their dog, Bear, is in competition for the most spoiled pooch in Ohio. She also lists her hobbies as reading, cooking with the family, researching new technologies for the classroom, and creating unique craft pieces. She describes herself as a people person.

When I asked her about taking this role, Veronica said, “I live my life guided by faith. I strongly believe God has opened this path for the next chapter in my life to continue my mission of inspiring and motivating others by my example.”

We are working on a few opportunities for Veronica to meet members of the community in coming weeks. Please join me in welcoming her to the Lehman family.