Culture: What Are We Growing?

Culture: What are we growing in our Catholic schools? 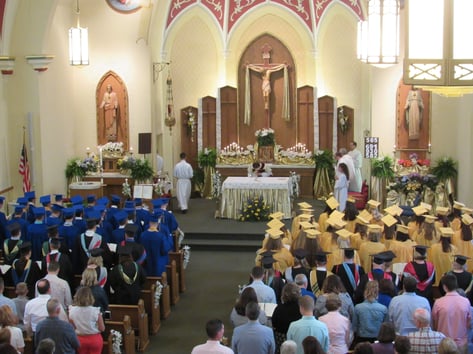 Maybe you have heard people criticize “modern culture”. Or perhaps you have had the delight of sitting through a meeting on “Organizational Culture” in your professional life. Maybe you have heard school officials eloquently describing the culture of the particular school with which they are affiliated. If someone asked you if culture was important, you would likely say yes. What is it that you are agreeing to? What is culture?

Often culture is misidentified as being a series of external characteristics. If we were to think of the Amish culture, for example, we might think of things like no electricity, homemade food, horsedrawn buggies, wood furniture, and beards. While these are all part of the broadest sense of culture, they don’t get down to the core. A little journey into etymology (where a word comes from) might be helpful.

Culture is derived from a latin word ‘colere’, which means to nurture, grow, or cultivate. Culture grows things. It grows characteristics, attitudes, behaviors, and ideas. Not only does it grow these things, but it is also made up of these things. If a high school has a football team that continually wins state championships in football, it is likely that there exists behind those championships a whole bunch of culture – attitudes, behaviors, characteristics and ideas about playing the game of football that lead to those championships.

An analogy can help. We will borrow one from Jesus Christ as recorded in Matthew chapter 13 "A farmer went out to sow his seed. As he was scattering the seed, some fell along the path, and the birds came and ate it up. Some fell on rocky places, where it did not have much soil. It sprang up quickly, because the soil was shallow. But when the sun came up, the plants were scorched, and they withered because they had no root. Other seed fell among thorns, which grew up and choked the plants. Still other seed fell on good soil, where it produced a crop—a hundred,sixty or thirty times what was sown."

What made a difference to those seeds was culture. It determined whether they would thrive or whither.

What culture are we planting our children in? Are their schools rocky places without much soil? Are there birds waiting to destroy their hope and dreams? Are there so many thistles present in their schools that they do not have the room to flourish?

Is it a school that has good soil - one that will help our children produce a crop that is many times what was planted?